Challenges and opportunities in the next decade

Home/News/Challenges and opportunities in the next decade

Challenges and opportunities in the next decade

What part will Brexit, housing policy and industry innovation play in meeting the nation’s housing challenges?

The 10th RESI conference is focussed on the challenges in housing the next generation. It will mark my fourth appearance providing the market context for the presentations and debate that follow.

Some would argue that the lack of this kind of continuity in the ownership of housing policy is one of the reasons why we have failed to address the housing problems now faced by future generations. 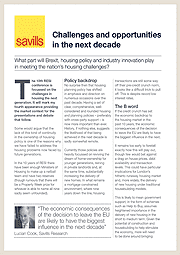 In the 10 years of RESI there have been enough Ministers of Housing to make up a netball team and have two reserves (though rumours that there will be a Property Week prize for whoever is able to name all nine sadly seem unfounded).

No surprise then that housing planning policy has shifted in emphasis and direction on numerous occasions over the past decade. Having a set of clear, comprehensive, well-considered and rounded housing and planning policies – preferably with cross-party support – is now more important than ever. History, if nothing else, suggests the likelihood of that being achieved in the next decade is sadly somewhat remote.

Currently those policies are heavily focussed on reviving the dream of home-ownership for younger generations, reining in private landlords and, at the same time, substantially increasing the delivery of new homes. In what remains a mortgage constrained environment, where nine years down the line, housing transactions are still some way off their pre-credit crunch norm, it looks like a difficult trick to pull off. This is despite record low interest rates.

If the credit crunch has set the economic backdrop to the housing market in the past 10 years, the economic consequences of the decision to leave the EU are likely to have the biggest influence in the next.

It remains too early to foretell exactly how this will play out, though few would bet against a drag on house prices, debt availability and transaction levels. This could have particular implications for London’s hitherto runaway housing market and, more widely, the delivery of new housing under traditional housebuilding models.

This is likely to mean government support, in the form of schemes such as Help to Buy, assumes heightened importance in the delivery of new housing in the short to medium term. Given the potential of construction and housebuilding to help stimulate the economy, more will need to be done around bringing forward infrastructure, freeing up development finance and meeting demand across a wide range of tenures.

Whatever the economic and policy context it will, of course, be the developers, housebuilders and housing providers who will have to make the running in addressing the housing crisis over the next 10 years. If necessity truly is the mother of invention, then we should see plenty of innovation over this period. Certainly the challenges will bring opportunities.

We can expect to see plenty of new kids on the block seeking to challenge and disrupt the current means of meeting our residential needs. Already the tech-savvy millennials are beginning to make their mark.

Equally, well-established players will need to quickly innovate and adapt to meet the country’s changing housing needs. This is likely to mean the planners will need to be more focussed on proactively bringing development forward, housebuilders will need to find new ways to increase production capacity (dare I mention the not-so-modern idea of modern methods of construction) and both old and new breeds of housing providers will have to supply housing across a more diverse range of tenures.

We will have to hope the next nine or so housing ministers provide the industry with the policy environment to actively encourage this. 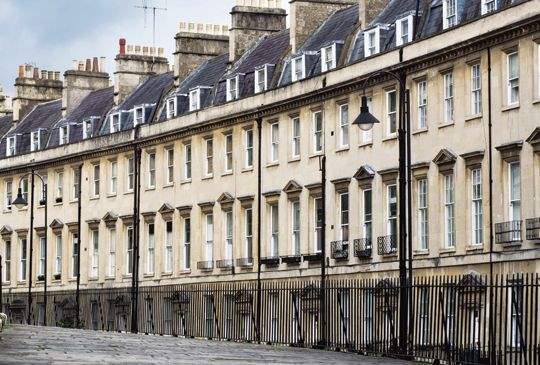